DZG’s popular babirusa Nick is as happy as a wild pig in sand after Keepers spruced up his sandpit. 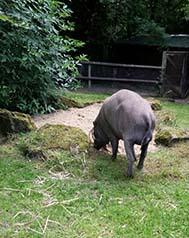 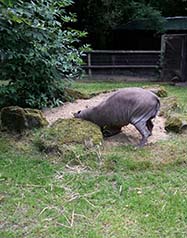 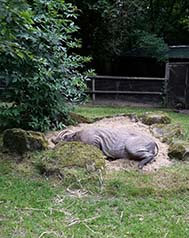 ABOVE: Nick steps into his newly-filled sandpit and gradually goes for an all-out roll around

And Nick – known affectionately by Keepers and regular visitors as Nick Pig’ – is very pleased with his home improvements.

Adam said: “The sandpit mimics his natural environment and allows him to show natural behaviours such as digging and rolling around in the sand.

“In the wild, babirusas typically spend much of the day in muddy wallows and dried mud and sand is also great for conditioning Nick’s skin.”

The babirusa is a wild pig native to some of the islands of Indonesia, and which is characterised by its almost hairless skin, long, slender legs and unusual tusks. The lower tusks of the male are similar to most other pigs and are used for fighting but the upper tusks are curved, grow inwards, poke out through the upper snout and curve backwards towards the forehead.