A self-taught artist who was sacked as a keeper at Dudley Zoo has returned more than 50 years later – for a VIP visit.

Rama Samaraweera, known as Sam, was invited back to DZG after he sent bosses three original oil paintings to make amends for not being the best ever zoo keeper. 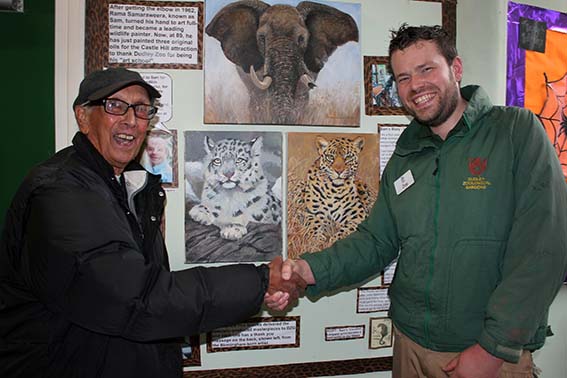 All is forgiven – Sam Samaraweera gets to see his artwork at DZG with his guide for the visit, Jay Haywood

The 89-year-old had been dismissed in 1962 for spending too much time sketching animals rather than caring for them and, 53 years on, was thrilled to be asked back as a special guest.

During the afternoon he was given a tour of the zoo, invited to feed our giraffe family and got chance to see his artwork in our Discovery Centre.

The Birmingham-born artist, who paints every day at the studio attached to his mid-Wales home, even brought along a fourth piece of art on the day which he had created especially for the visit. 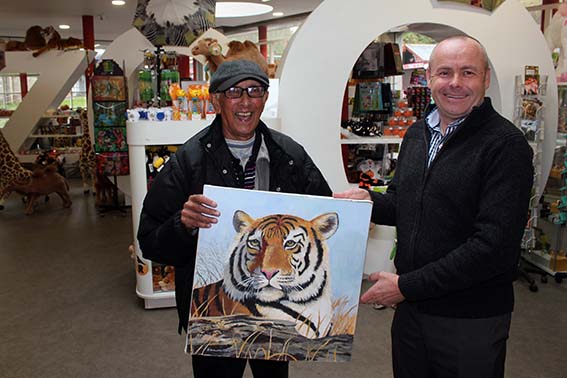 Zoo Director Derek Grove, pictured above with Sam and his latest gift to the attraction, said: “It was wonderful to meet Sam and to be able to thank him in person for the three paintings and the additional tiger artwork he brought with him.

Sam was very interested in how the zoo had changed over the years and to learn more about the important conservation work we do.

Sam said: It was wonderful getting a tour of the zoo which I describe as my only art school. I also helped feed the giraffes and was treated like a VIP, despite being given the sack all those years ago.

I was pleased to see more keepers and a lot more health and safety, compared to the 1960s.

In my day you were meant to just get on with your job and talking to visitors back then was frowned upon.

His nephew Phil Brooks, Head of Photography at Dudley College, delivered the three paintings – an elephant, a snow leopard and a cheetah – to the zoo just over a month ago and was delighted to join his uncle on the visit.

He said: Uncle Sam loved seeing his work on display in the Discovery Centre where he also recalled Bonzo the gorilla, who was resident at the zoo back in 1962.

He was glad to see Bonzo now immortalised in the form of statue in the education block and the highlight was feeding with the giraffes with his great nephew and great niece Archie and Tia. 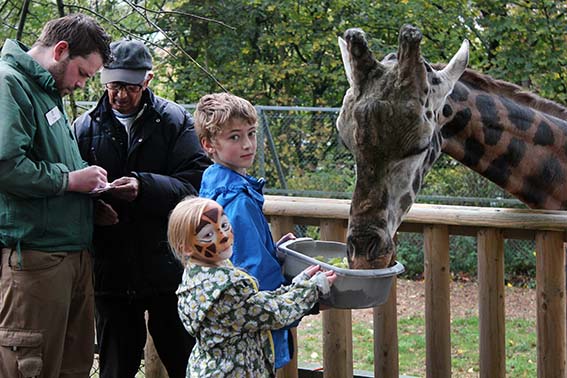 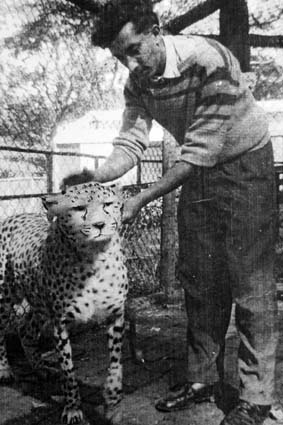 Nephew Phil added: “My uncle has been a professional wildlife painter for the last fifty years and to this day credits Dudley Zoo as the catalyst for his career.

Uncle Sam was only at the zoo for a year but he did love the animals, especially the big cats and Grace the giraffe.

Sam, pictured right during his time as a Dudley Zoo keeper, has exhibited and sold at the Royal Academy, The Society of Wood Engravers, The Graphic Society, The Society of Wildlife Artists and The Pastel Society. He has staged five one-man exhibitions, two of which were in London.

In the 1970s his ‘Clouded Leopard’ picture was the biggest-selling print in America.

Lovely to have you back Sam and to hear more about your remarkable story!

Previous: Going ape on Halloween!
Next: For the record!