A pair of DZGs roul roul partridges have headed outdoors for the summer. 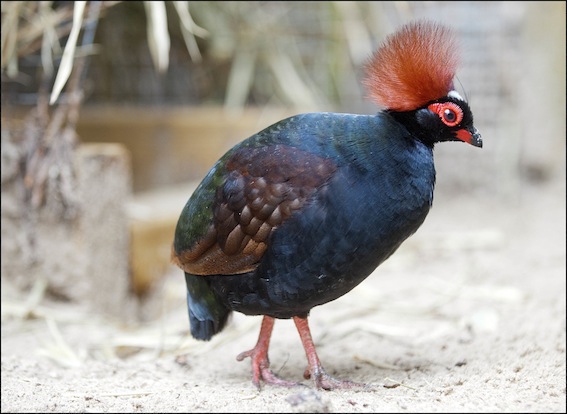 ABOVE – The male roul roul partridge has a spectacular red crest

Bird keepers have relocated the two tropical birds from their off-show heated aviaries  where they spent the colder months  out into their summer enclosures.

The male and female have been moved outside first but they will soon be joined by another female who is still indoors at the moment.

Head of Birds Kellie Piper said: Roul roul partridges are native to the tropical rainforests of South eastern Asian countries including Thailand, Malaysia, Sumatra and Borneo, so are used to warmer weather.

They dont cope well during the cold months so well move them back inside before we have any threat of frost.”

Roul roul partridges are a striking species, with the female sporting bright green plumage with a grey head, while males are dark metallic green in colour with a tall red crest on top of their head.

Roul roul partridges use their feet to probe for insects, seeds and fruit on the forest floor

Roul roul chicks are fed bill to bill by their parents