Reggie, our Linne’s two-toed sloth, has proved to be the most popular animal at DZC of 2019 – overtaking our usual firm favourite! 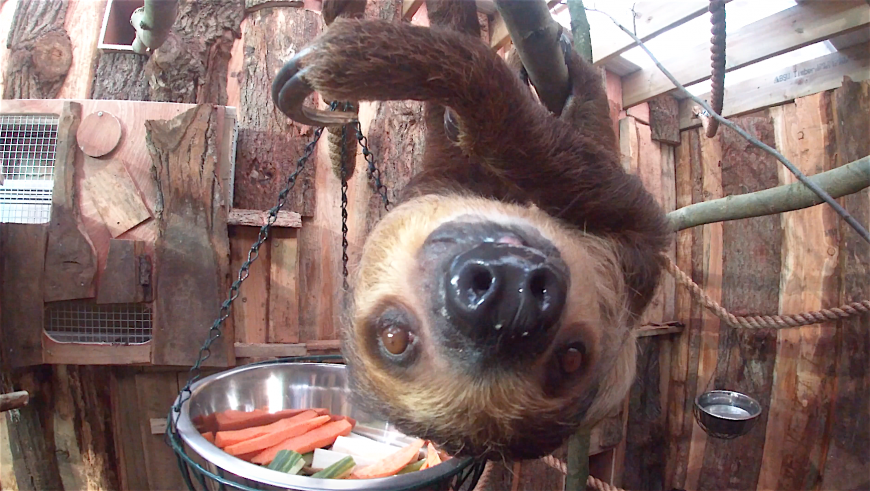 Since arriving last summer, the four year-old has quickly secured lots of fans and was our most adopted animal over the festive period.

DZC Marketing Assistant Louise Curtis said: “Reggie has been an extremely popular addition to our collection and we sent out more Christmas gift adoptions for him than any other animal on site, as he toppled our usual fan favourite, Kubwa the giraffe, from the top spot.”

Another new arrival, Tommy the Arctic fox, who joined us with his three brothers in October, was also a huge hit with end of year adopters, as was our 28 year-old female Bornean orangutan, Jazz.

Louise added: “Funds raised from our adoption packages support our ongoing conservation programmes, so we’re very grateful to the visitors who help us through their purchases.”

Reggie has settled in well to his new purpose-built enclosure and has now been joined by Goeldi monkeys, Francisco and Santiago.

He’s found a favourite nesting box near the rear of the indoor den, where he can be spotted most days, but a digital screen on the outside wall is playing an eight-minute looped film of Reggie moving around his enclosure and tucking into some of his favourite foods, so visitors can see what he looks like, even if he’s curled up asleep!

Previous: Lenny visits DZC
Next: Our baby gelada is…