DZG rats, Duncan and Trent, took centre stage alongside Queen Rat at Wolverhampton Grand Theatre as part of the launch of its forthcoming Christmas panto. 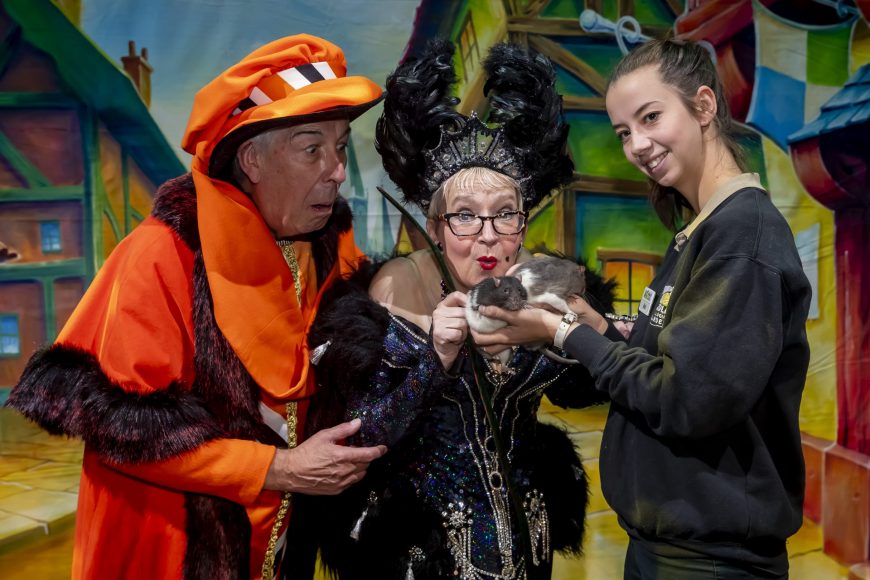 Together with our Outreach Team Member, Mel Pilmore, our cuddly pair took their place beside two of the show’s stars – Su Pollard and Jeffrey Holland – who are playing Queen Rat and Alderman Fitzwarren in the family extravaganza, Dick Whittington.

The panto, which DZG is once again sponsoring, opens on December 7 and also features Coronation Street’s Ryan Thomas and celebrity impressionist Aaron James, while Ian Adam’s returns as the dame for the fourth consecutive year.

DZG Marketing Manager, Andrea Hales, said: “We’re thrilled to be continuing our panto partnership with The Grand Theatre and we’ve extended a warm welcome to the stars of Dick Whittington to come and visit us here at the zoo during their festive run.”

Scott Bird, Wolverhampton Grand Theatre’s Press and PR Manager, said: “Every year we enjoy learning about different animals and what an appropriate way to mark Queen Rat’s arrival in Wolverhampton than with two of the zoo’s very own rodent residents!”

Thanks to Wolverhampton Grand Theatre for the photograph!