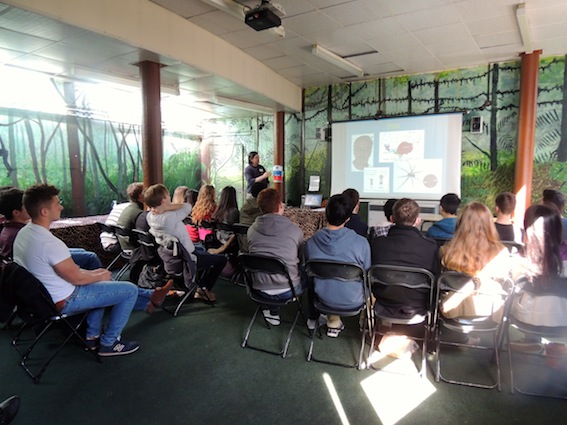 This is the third consecutive year pupils from Old Swinford Hospital School, in Stourbridge, have joined our workshops which explain how we offer a hands-on approach to overcoming spider fears for members of the public. 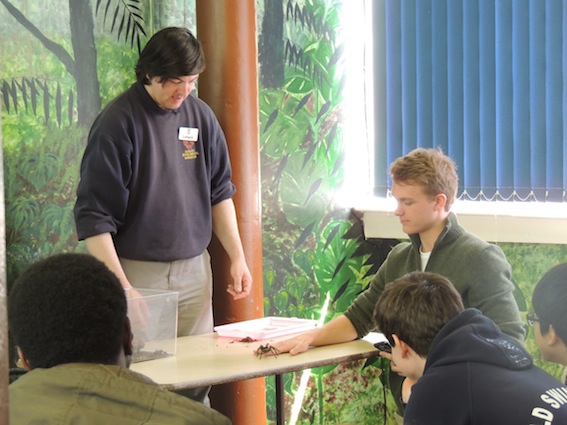 And following the school’s first visit, Old Swinford Hospital School’s Subject Leader for Psychology, Dr Jane McGee, was inspired to pen two charity children’s book called The Spider That Came in From the Cold and its sequel, One Small Step for Spiders, as well as recently publishing a collection of short stories called Cobweb Capers, which all aim to help children develop a positive view of the eight-legged creatures. 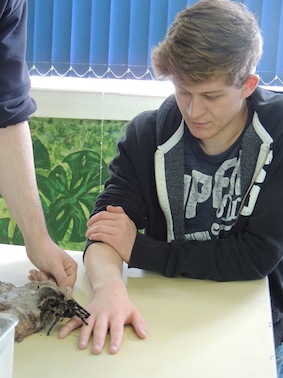 During the hour-long sessions, Presenter Langan Turner led the 40 17 and 18-year-old students through the powerpoint used in arachnophobia sessions.

Langan said: “It was an interesting workshop, as these students were coming to it from a different angle.

“I explained how the whole session was about a gradual desensitisation of spiders, but in a humorous and relaxed way, by including various topics such as cultures, perceptions, conditioning and scaremongering.”

Following the presentation students had the chance to get hands-on with spider skins before meeting a tarantula.

Dr Jane McGee, said: “These sessions are ideal for allowing the students to see psychology in action, as Langan explained how staff deal with real arachnophobia from a gradual build up to actual contact of spiders.”

Caption: Langan goes through the arachnophobia presentation with Old Swinford Hospital School’s Psychology students, before Alex Cottingham, (pictured above centre) and David Devine (pictured above left) get hands-on with some of the Discovery Centre’s eight-legged residents.

Previous: Mia’s best day ever
Next: Remember the postcode!