Two cheeky small primates showed their support for Children in Need when they rescued Pudsey Bear in Lemur Wood!

The charity mascot was accidently dropped in the one-acre walkthrough exhibit by a young visitor  much to the delight of sharp-eyed black-and-white ruffed lemurs, Yoda and Yella, who quickly recovered the cuddly toy.

Trainee Keeper, Harley Hunt, said: “The boys obviously took a shine to Pudsey’s yellow fur and spotted eye patch and when the little girl dropped it on the floor they managed to grab the bear and scramble back over the fence with it.

“Thankfully, they handed the teddy back and after a wipe down we returned it to its owner who seemed quite pleased that Pudsey had been on a little adventure of his own!” 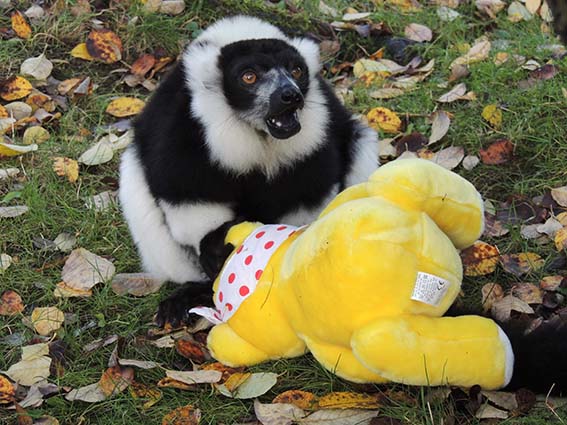 Previous: Welcome to Joao!
Next: Tiger transfer captured on film