How do you help a porcupine move house? 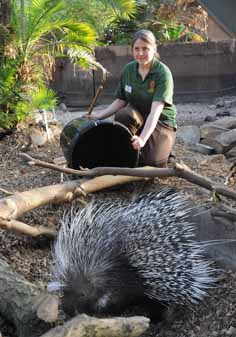 That was the prickly poser facing keepers when they transferred three crested porcupines to a new enclosure.

Assistant Curator, Richard Brown, explained: “If disturbed, crested porcupines raise their quills to make themselves look bigger using muscles in their back.

“When this happens they charge backwards towards their enemy’ and can cause serious injury.

“These attacks are known to have killed lions, leopards, hyenas, and even humans, so we wanted to avoid upsetting them at all costs.”

He added: “However, porcupines like to hide in dark corners, so keepers persuaded them to crawl into a clean dustbin, and then gently carried them to their new enclosure.”

Twelve tons of woodchip have been provided for male, Prickles, and females, Edwina and Sung, in the new enclosure, in Monkey tails, which has been deisgned in-house by keepers, and which mimics their natural habitat.

Richard said: “Happily, they went into the bins without too much fuss and are settling into their new home.”

Crested porcupines are the largest of the species, with fully grown males weighing around 25kg.

CAPTION: Move it: Trainee keeper, Cerys Grove, attempts to persuade crested porcupine Prickles to get in the plastic bin.