DZG is highlighting the plight of wild parrots facing extinction through widespread poaching.

Parrots in Peril in the site’s Discovery Centre, which will be seen by thousands of visitors throughout summer, has been put together by Presenter Kellie Piper. 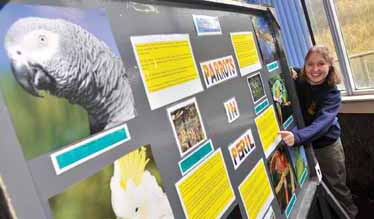 Kellie, aged 27, who looks after three parrots at her home in Tewkesbury, Gloucestershire, said:?”I have always had an interest in parrots and knew there was a problem with culling in the wild as part of illegal trading practices.”   A third of the 345 species of parrots are threatened with extinction from loss of habitat and the trade in wild birds, 30 species are extinct due to the impact of humans, and only one in every five parrots captured in the wild survives the ordeal.   Kellie added:?”I did some research and was shocked by how many parrots are in danger, it was even worse than I imagined, so I put together the exhibition to help educate people about the activity.   “One of the messages from the display is that after doing your homework you still want to parrot a pet, please go to an established dealer and make sure you do not buy a bird that has been caught illegally.”    CAPTION: Presenter Kellie Piper with the Discovery Centre display which she hopes will alert visitors to the plight of wild parrots.