The bird, who has been named Boomer, was hatched in an incubator after it was abandoned as an egg.

Keepers are hand raising the youngster and have started to introduce it to the outside world with regular playtimes out on the grass. 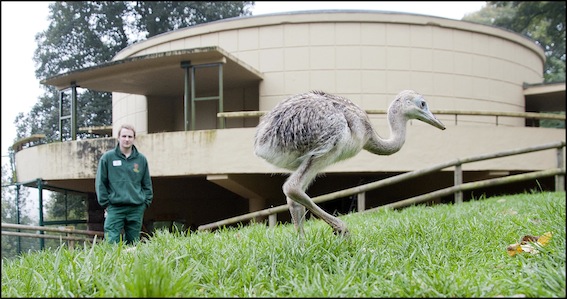 Bird Keeper, Luke Millar, said: “Boomer is currently living in an indoor nursery pen, but it is important that he gets natural sunlight, so we’ve been taking him out on the grassy area by Lemur Wood when it’s been dry for about 45 minutes a day.

“He is definitely enjoying being out and about and we are trying to train him to follow us on command and stop us having to carry him everywhere. 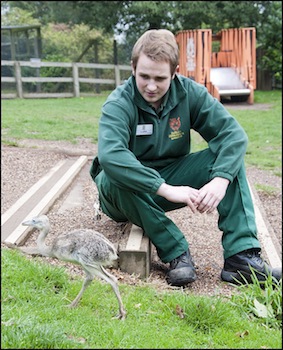 “One of the first occasions we brought him out, he was happily minding his own business on the grass, when the boys in Lemur Wood started to call and almost scared the living daylights out of him as he didn’t know what was going on!

“He’s got very long legs for running off, so we have to keep a very close on him when he’s out.”

Although keepers are calling Boomer a he’ they won’t actually know his sex until the bird is almost fully grown as male rheas have a thick black line running up their throat unlike females.

Rheas are large, flightless birds, which look very similar to an ostrich and can reach heights of up to 1.5m.

Previous: Animal art!
Next: Happy Hallow’en to all!