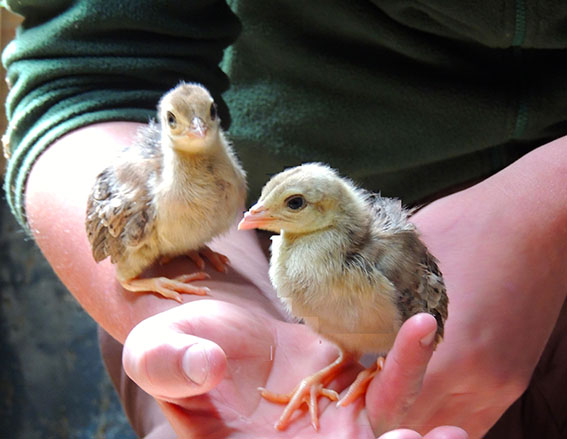 The chicks, who are thought to be a few days old, were discovered near to the Queen Mary Suite.

Keepers scooped them up and currently have them under heat lamps, where they will both remain for the next few weeks.

Keeper, Kriss Pearson, said: “The chicks were on their own, so are probably the offspring of a first time mum, as normally they follow wherever she goes.

“To give them any chance of survival and to protect them from any predators, particularly crows, the decision was taken to hand rear them.

“They are only a few days old so we will keep them warm under heat lamps for about four weeks, when they will then be ready to move to the Farm Barn.

“Once they are bigger and strong enough we’ll release them on site to join the rest of the free roaming peafowl.”

Keepers won’t know the sex of the chicks until they begin developing their adult feathers, with males sporting the iridescent blue-green coloured plumage with their impressive elongated tail feathers, while the females are a dull green, brown and grey colour.