Bird keepers have become surrogate parents to a newly-hatched rhea, after it was abandoned as an egg by its parents. 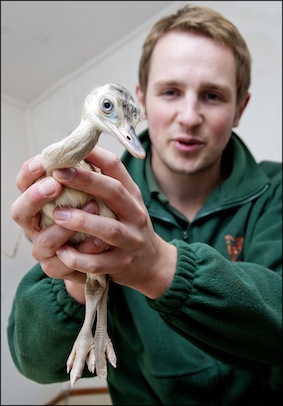 Despite being only a few days old, the newborn is already almost the size of a penguin, but still has a long way to grow until full size when it will hit heights of around 1.5 metres.

Keeper, Luke Millar, pictured right, said: “Unfortunately, the parents decided not to build a nest or incubate the eggs, so we stepped in and rescued one and are hopeful of hand rearing it.

“We kept the egg in the incubator for around 40 days until it successfully hatched and now we’re feeding it several times a day with chick crumb to build up its strength.

“It’s an unusual looking bird, looking almost dinosaur-like, but it’s doing really well and already calls out very loudly to us, which we’re getting used to hearing now.”

Rheas are large, flightless birds, which look very similar to an ostrich.

Their eggs measure about 130 mm by 90 mm and are yellow in colour.

But it is the male rhea that builds a nest, which the female lays her eggs in, before the male returns to incubate them and care for the young.

Male rheas will also operate a decoy system by placing some of the eggs outside the nest, which can be sacrificed to predators, in the hope they then won’t attempt to get the other eggs inside the nest.

Chicks also all hatch within 36 hours of each other  even if the eggs were laid weeks apart.