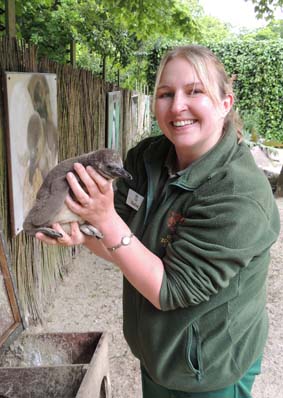 Two of the youngsters have just fledged the nest after staying with their parents for two months.

All nine are fully parent-reared and the other seven are still being looked after by their parents in their nesting boxes.

DZG’s Head of Birds Kellie Piper (pictured right with one of the nesting chicks) said it was very exciting to have penguin babies, especially as it was early in the breeding season and we could expect more.

She said: “The first two came out of the nest last week and have joined the rest of the colony.

“The chicks stay in the nest for the first two months when their mum and dad both feed them. 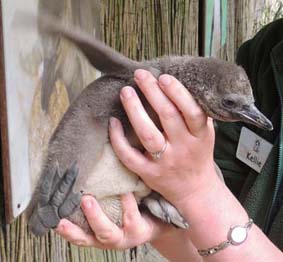 “It’s a nice team effort and they make really good parents. We leave them to it, just checking on them once a week. We also make sure the parents have extra food.

“The chicks are born with a downy layer which is soft like velvet and by the time they leave the nest their feathers are fully waterproof.”

Zoo Director Derek Grove said: “The latest births are another success story for our international breeding and conservation programme with this endangered species.

“Here at DZG we have the largest colony of parent-reared Humboldts in the UK, which we started 24 years ago, and we’re incredibly proud of what we’ve achieved.”

Humboldts are one of the rarest species of penguin and are vulnerable to extinction due to climate change and the depletion of food stocks in the wild.

They make caring parents and share the job of incubating their eggs. Females share egg sitting duties with the male for about 40 days.

Once the chick is born they take turns to forage for food, and will not leave the baby until it is about two months old.

DZG’s pool has proved an excellent environment since the breeding programme was started in 1991; it is home to one of the largest breeding colonies in Europe and Dudley-born penguins have helped found colonies at 11 collections across the UK.

Previous: Adelaides back in action!
Next: Keepers made the day!