Exotic breed pigs Bob and Betty, who live on the Farm, are on a roll with their latest toys after a Sandwell company donated empty cable drums for the kune kunes. 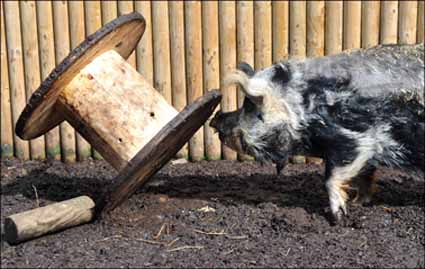 Cables Britain, which distributes power, fibre-optic and heat detection cables nationwide, handed over the reels to keepers who filled them with edible treats for Betty and Bob, who roll them around until they can get their trotters on the tasty titbits hidden inside.

She said: “The reels have proved popular with the pigs, and also with our macaque monkeys.

“It’s more enriching for our animals if they have to do something to find their food, rather than have it given to them and we really appreciate this useful gift from Cables Britain.”

Nigel Billingham, Technical Engineer for Cables Britain, based in Waterfall Lane, Cradley Heath, said: “We were pleased to pass on our surplus cable drums to Dudley Zoological Gardens and hope the animals have many hours of entertainment from them.”