The pitter patter of tiny penguin feet has been echoing around DZG as keepers accompany 10-week-old Humboldt chicks, Pete and Louis, on a morning poolside stroll. 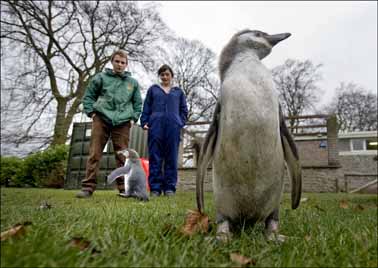 The youngsters’ daily waddle takes them from the bird cabin where they are being reared 250yds across the site to the pool where the zoo’s 70-strong breeding colony is based.

Curator, Matt Lewis, said the chicks had been hand reared because their parents had deserted the eggs.

He said: “It may be an unusual sight to see baby penguins putting their best feet forward with their keepers for a morning walk to the pool, but taking them there during the day will help them adapt to living in the pool when they are more independent.

“Pete and Louis are among 10 chicks which have hatched in the middle of winter, unfortunately, they were rejected by their mums so we had to step in to ensure they survived.” 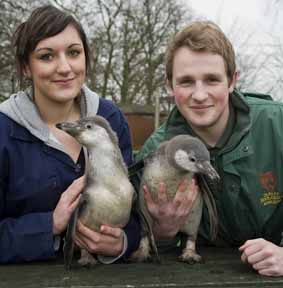 Humboldts are one of the rarest species of penguin and are vulnerable to extinction due to climate change and the depletion of food stocks in the wild.

DZG’s pool has proved an excellent environment since the programme was started in 1991; it is home to one of the largest breeding colonies in Europe and Dudley-born penguins have helped found colonies at 10 collections across the UK.

Pete and Louis will soon  be joining their new friends and family in Penguin Bay, DZG’s exciting new walkthrough exhibit due to open this summer which allows visitors to get close to some of the rarest birds in the world.

CAPTIONS: (TOP) Walk this way:?Humboldt penguin chicks, Pete and Louis, set off on their daily stroll.

Jemma helped on Birds Section during her two-week placement at DZG via a recently-founded Animal Care / Animal Management courses partnership between DZG and Dudley College.