One of DZG’s most popular attractions is set for a springtime transformation. 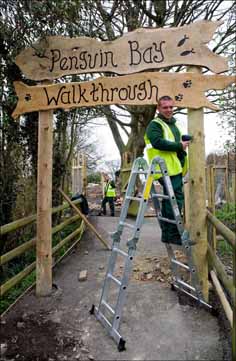 Work is underway to turn the Humboldt penguin enclosure into a walkthrough experience for visitors.

Penguin Bay will double the land area available to the 70-plus penguins  one of Europe’s largest colonies of Humboldts  and allow visitors to get closer to the highly endangered birds.

Tarmac pathways and garden areas incorporated into the site have been replaced with sand and rocks, creating an authentic landscape for the penguins, and decking areas and glass viewing platforms currently under construction by DZG maintenance staff will afford close range views of the pool.

The new feature will launch on Sunday, May 6   the date the zoo opened to the public in 1937  as part of the our 75th anniversary celebrations.

Penguin Bay has been designed in response to visitors’ requests. CEO?Peter Suddock explained: “For years customers have asked to get nearer to our colony of rare Humboldt penguins and the new layout means they will be able to do just that, plus have a fantastic overhead viewing platform to watch them swimming. 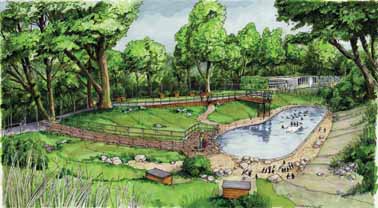 “It will give the birds more space and we will be using a rock and sand-based substrate to mimic their wild habitat.”

Mr Suddock added:?”Work will take three months to complete and is particularly laborious as all of the birds will be in situ throughout the whole of the programme which means we have been unable to use mechanical diggers for the operation.”

The £40,000 project will also include refurbishment of nest boxes, checking and resealing of the pool and provision of a creche for young HumboldtsThe scheme, which has been designed in-house, has been funded by DZG with a £3,000 donation from Darlaston-based company Rubery Owen.

Mr Suddock said:?”We are very grateful to Rubery Owen for their donation. We have a long-standing partnership with the company and they have supported several projects over the years.”

DZG’s highly successful breeding programme has been recognised by BIAZA (the British and Irish Association of Zoos and Aquariums), winning its award for sustained breeding of a captive species.

CAPTIONS:?The signs are up:?DZG?Maintenance worker Drew Jordan erects new signage at the entrance to DZG’s new Penguin Bay walkthrough experience, due to open next month as part of the site’s 75th anniversary celebrations.