Keepers are brushing up on their Black Country dialect by practising the local lingo on newly-arrived Sumatran tiger, Joao. 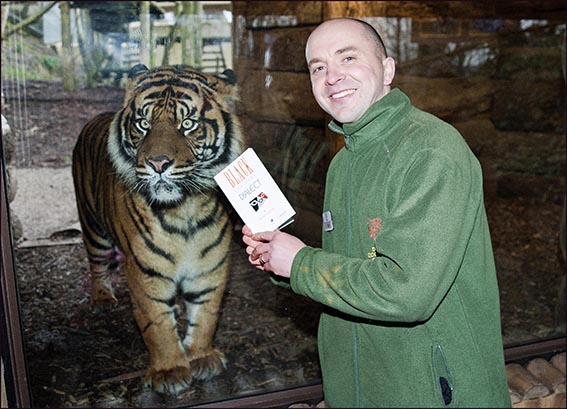 The 22-month-old big cat transferred from Krefeld Zoo in Germany 11 weeks ago, and is gradually adapting from his native Deutsch to Black Country spake.   And in readiness for July 14’s Black Country Day Assistant Curator, Richard Brown  a Tipton lad  is daily going over familiar phrases with Joao, who is one of the world’s rarest animals.   Head of Media and Communications. Jill Hitchman, said: “As the Black Country’s favourite zoo DZG is keen to support local events highlighting the area.   “Since the zoo opened in 1937 we have featured in the photo albums of most families in the Black Country throughout those seven decades, so we are very much a part of the scene.”   She added: “Joao is now learning ‘ere’s yer fittle’ and ‘tara a bit, we’m a gooin wum’ from big cat keepers, which translates as ‘here’s your lunch’ and ‘bye for now, we’re off home’ so he’ll be pretty much used to the local language come summer!”   Staff will also be spreading the word with Keeper For a Day experiences throughout July which sees animal fans from across the world shadowing keeping personnel at DZG as they go about their daily duties.   Jill said: “Staff will be introducing folk from across the country and indeed, overseas visitors, to a little local dialect and teaching them ‘Owamya and Tara Fer Now as they arrive and leave the site at the end of their day with us.   “It’s all good fun, but it’s also a chance to let people know about the Black Country and its strong community, characters and identity.”

Previous: G’day, meet the critters from Oz!
Next: Taste of zoo life