A unique species of duck learned to fly for the first time yesterday at DZG! 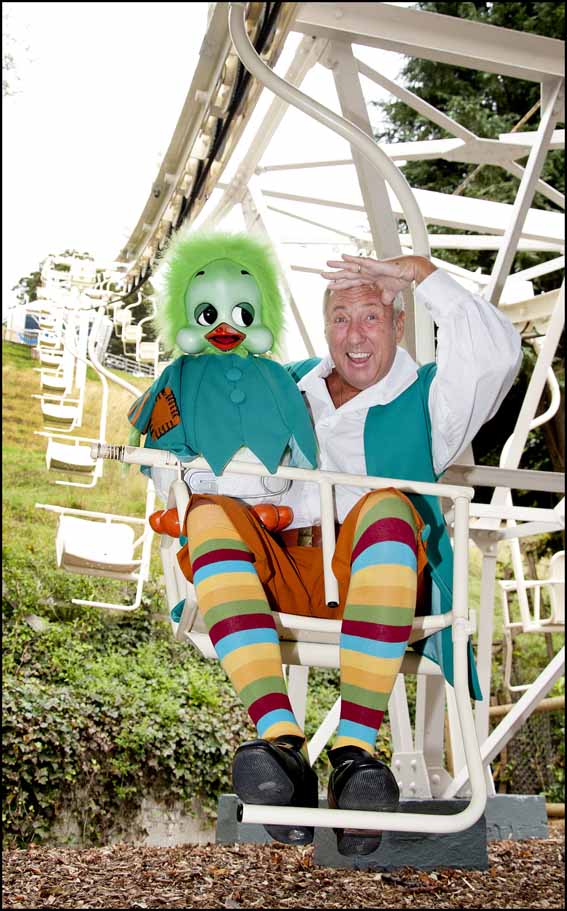 But keepers didn’t need to get involved as the avian in question was none other than cuddly Orville who, along with ventriloquist Keith Harris, had popped in to test our recently refurbed vintage chairlift!

Keith said: “As everyone knows Orville can’t fly, but the chairlift gave him an amazing experience  he didn’t want to get off!   “Of course, I had to stay on with him in case he got scared, but he was absolutely fine and loved every minute of his flying lesson.”   DZG has become an official partner for Wolverhampton Grand Theatre’s 2012/13 pantomime, Jack and The Beanstalk, starring Orville and Keith, and the duo spent time on site talking about our latest partnership.

DZG is sponsoring the dress rehearsal of Jack and The Beanstalk at The Grand Theatre in Wolverhampton  and we’ve got more than a thousand tickets to give away for the December 7 panto date!

The family favourite will feature TV star and Loose Women presenter Sherrie Hewson, veteran panto entertainer Keith Harris plus the lovable Orville and Cuddles the Monkey. Actor and comedian Ken Morley will play The King; X-Factor singing sensation Niki Evans returns for her third Grand Theatre pantomime as The Fairy and legendary pantomime performer Nigel Ellacott joins the line-up as Jack’s mom, Dame Trott.    DZG CEO Peter Suddock, said: “We are delighted to be teaming up with a premier theatre that’s on our doorstep and hope everyone will enjoy Jack and The Beanstalk at The Grand and then book into Santa’s Jack and The Beanstalk-themed grotto at DZG.”   We’re looking for community groups, schools, charities and local organisations who would like to join us at the dress rehearsal on December 7 at The Grand, in Wolverhampton.

If you think YOU?or someone you know is eligible please get in touch.

Contact julia.marketing@dudleyzoo.org.uk  we have more than a thousand tickets to give away!!

DZG’s Santa’s Grotto runs from December 8 to Christmas Eve and includes a magical train ride and show, plus a chance to see some of the rarest animals in the world  including meeting live reindeer in the courtyard of the 11th century Dudley Castle.    Jack and The Beanstalk at The Grand runs from December 8 to January 20. For more details visit www.grandtheatre.co.uk or call the box office on 01902 429212.