The 22-year-old heavyweight, who currently tips the scales around 400kg, or 63 stone, needs to bulk up during the colder months to endure the icy water in the moat pools around 11th century Dudley Castle at the heart of the zoological gardens. 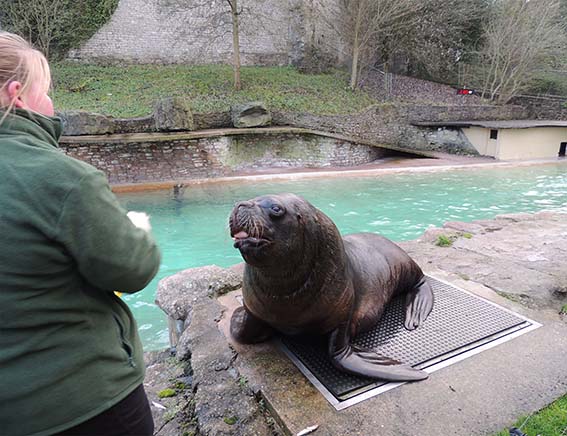 Sealions have a thick layer of fat beneath their skin which acts as insulation during chilly periods, rather like a duvet, and at this time of year keepers weigh Orry and female, Cleo, each day to make sure they are the optimum weight.

Both sealions are now at their expected winter weight with Orry around 400kg and Cleo weighing just under 200kg; keepers adjust their fish intake according to their weigh-in results.

They receive an average of eight kilos of sprats a day, in addition to mackerel and herring. Both sealions will eat less when the weather warms up, with Orry dropping to around 320kg and Cleo averaging 135kg.

Presenter, Pam Midwood, said: “Mackerel and herring are fantastic oily fish, so are really good for their health and Orry especially loves the taste of them.

“Cleo isn’t so keen on the bigger fish, so keepers have to make sure she gets more of the smaller sprats, which can be tricky when Orry’s about!”

Hear Pam talk about the sealion weigh-in sessions with senior keeper, Sarah Evans, in the video below  excuse the blustery weather!

Previous: Blown away by DZG!
Next: Meerkats’ pillowcase play fight!