A Bornean orang utan born at DZG has made her public debut. 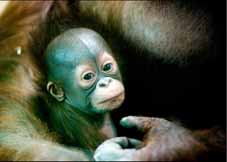 The six-week-old was brought into the general viewing area of the great ape house by mum, 19-year-old Jazz and the pair have gradually ventured further around the enclosure into the external sections – and the sunshine.   From birth the baby, who keepers have named Sprout, remained in a quiet private chamber away from members of the public, until mum was ready to show her to visitors. Dad is 16-year-old Jorong.   Keeper David Zebedee said mum and baby were doing well and Jazz seemed to be enjoying motherhood.    He said: “She’s adapted quickly and is now doing the proud mum bit and showing Sprout to visitors.”   Keepers monitored Jazz throughout her eight-and-a-half month pregnancy and made sure she was afforded maximum privacy in the late months within the central areas of the house. Urine tests revealed she had conceived, but staff had to rely on body changes and mood swings to determine the stages of gestation.   David added:?”We reckon Sprout weighed about four pounds when she was born, and at nine weeks she’s around the ten pound mark, which is good, and she’s growing fast. She will be weaned at approximately eight to 12 months, and could supplement the solids with mum’s milk until the age of three.”   She will bond with Jazz until the age of nine.

David said:?”For the first few days after the birth it was eerily quiet in the house, the rest of the group – Jazz’s mum Azimat and male  Benji – obviously knew about the new arrival as they could hear the baby, but they hardly made a sound, which was very strange as they’re usually a noisy bunch, but things are back to normal now.   “She’s a beautiful baby, and very special, too, as the species is so endangered in the wild.”   See more pics of Sprout here.   CAPTION: Meet Sprout, DZG’s baby orang, with proud mum, Jazz – and below at 12 weeks with a scary hairstyle! 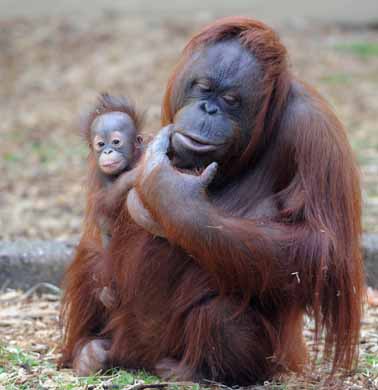