A cake a day keeps the doc away for one of DZG’s most popular animals. 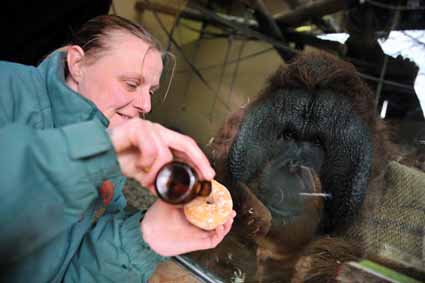 Twelve-year-old Bornean orang utan, Jorong, stubbornly refused to take medicine prescribed to treat a chest infection  until a concerned keeper had the brainwave of hiding it in a doughnut.

DZG Senior Curator Derek Grove said: “Jorong didn’t like the taste. We tried mixing it with his regular food, including bananas, but orang-utans are renowned for their intelligence and as soon as he tasted the medicine he would not eat it.”

Primate keeper David Zebedee spotted the doughnut in the site’s restaurant and decided to see if it would help the medicine go down.

Derek added:?”It has worked a treat. It turns out that Jorong loves doughnuts, and the sweet taste hides his medicine. We would not normally feed him cake, but our vet has assured us it is perfectly safe in such small quantities, and anything that means Jorong is taking his medicine is a good thing as we want to get him well again.”

Jorong, who transferred from Dublin Zoo three years ago as part of a major conservation programme for this highly endangered species, is one of four orang-utans at DZG.

Last year saw an £80,000 transformation of the 40-acre site’s former orang-utan house. The innovative new layout, designed by Derek, has created five dens for the animals, three of them private, and two public viewing areas, which enable visitors to see the indoor spaces and the orang-utans at close quarters.

CAPTION: Head of Primates Pat Stevens, hands out the daily doughnut disguising his medicine to Jorong.

Previous: Meet Will and Kate
Next: Compare our meerkats