Reindeer Hail has a key role to play every Christmas when he joins the fun in Santa’s Grotto. 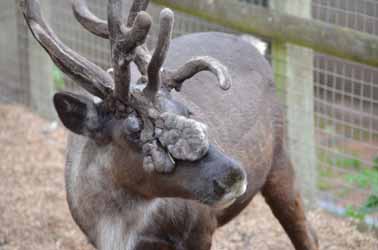 Along with eight reindeer friends, Hail meets young visitors in the 11th century Dudley Castle courtyard throughout the festive season.

So it was a blow when the eight year-old developed an unsightly tumour on his magnificent antlers which grew over Hail’s eye, making it difficult for him to see.

DZG vet Peter Stewart, explained: “The lump was an antleroma, and had grown from the velvet on his antlers. It was causing him a problem, so we had to operate.

“I gave Hail an injection to put him to sleep, and removed the lump very easily.”

A second injection to administer a reversing agent soon had him back on his feet, and he was quickly back to his normal self and in with the rest of the herd.”

Assistant Curator Richard Brown said: “It was a shame to see Hail with a nasty lump on his antlers, but thanks to the vet’s intervention, Hail is able to continue in his traditional role as part of Santa’s team of reindeer now the festive season is here.”

CAPTIONS: TOP: Reindeer Hail’s tumour is spreading over his eye.

ABOVE: Hail’s antlers are bandaged post-op.

BELOW: Hail with keeper Jay Haywood  back in his traditional role as head of Santa’s team of reindeer. 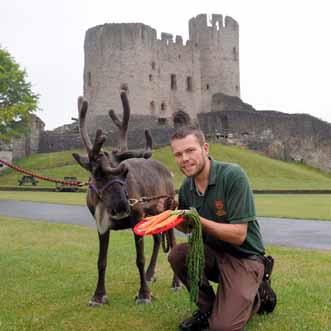 Previous: Enjoy the panto, everyone!
Next: Home from home for Harry