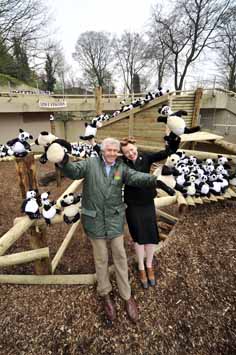 The 1937 Tecton building, originally constructed for polar bears, was given a makeover to provide accommodation for 31year-old black bear Inca, but the move was delayed following a plea from Black Country artist, Jonnet Middleton.   A recent community arts project saw Jonnet, formerly of Kingswinford, co-ordinate the knitting of 130 black and white pandas using a 1947 pattern – and she needed an appropriate backdrop for a photo shoot.   DZG Head of Media and Communications, Jill Hitchman, said:?”Jonnet has been a long-term supporter of DZG? many of her projects are inspired by visits as a child.   “She ran the arts project in Coventry and got hundreds of knitters across the region to make up the pandas which are now on their way to an orphanage in Chengdu, an area badly hit by an earthquake three years ago which left many youngsters without families.”   She added: “Jonnet asked if we had a suitable area where she could photograph all of the completed pandas before their journey and we immediately thought of the revamped bear enclosure.   “It took a while to arrange them all, but Inca hadn’t moved in at that point or it could have become quite exciting!” 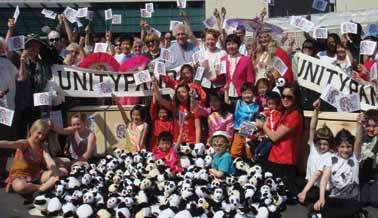 Following the photoshoot DZG?CEO Peter Suddock helped Jonnet and her team pack the pandas in bespoke crate for their long flight to China.   He said: “It was all a light-hearted gesture and we declared them fit to travel and waved them off.”   CAPTIONS:   DZG?CEO Peter Suddock and Black Country artist, Jonnet Middleton, with the 130 knitted pandas in the newlook bear enclosure.   Crowds get ready for the panda send-off 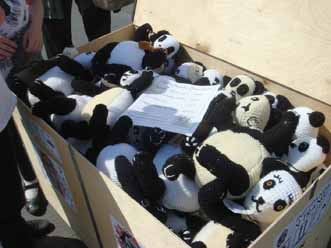 The pandas are packed in special crates for their journey to the Chinese orphanage. 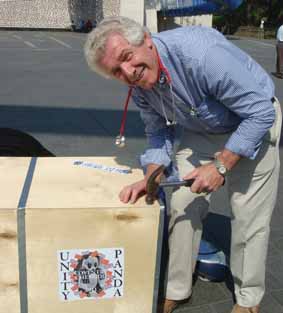