Dudley Zoo’s two giraffes have created some on the hoof art to raise funds for their threatened cousins in the wild. 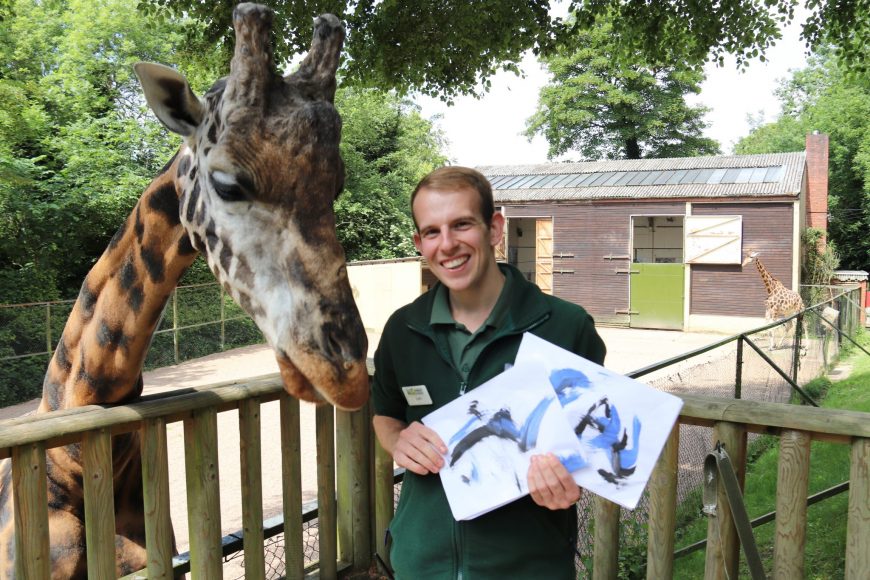 Two original canvasses, one painted by our 17-year-old male Kubwa and the other by nine-year-old female Josie, will be up for grabs in a raffle during our weekend event to mark World Giraffe Day.

And those not lucky enough to win the raffle can still grab some giraffe art, as other designs from the popular pair have been made into key rings which will be on sale.

All the art, as well as biofacts and lots of information, will be on a stand by the giraffe paddock tomorrow and Sunday to raise awareness and money for the work of the Giraffe Conservation Foundation, which organises the annual awareness day.

There will also be giraffe ears and tails for sale and chance to have a selfie in our special frame or alongside giraffe mascot Geoffrey. And our giraffe talk and special training demonstration takes place at 12.45pm each day.

Senior Keeper Sarah Evans said: “Next week is World Giraffe Day, on June 21st, which is appropriately the longest day. We chose to celebrate this throughout the whole weekend so we can talk to visitors about the plight of giraffes in the wild.

“It’s unthinkable to imagine a world without these majestic creatures so it’s absolutely vital that we do all we can to help ensure the survival of these species for future generations.”

The International Union for Conservation of Nature (IUCN) Red List has regraded the giraffe as vulnerable following a devastating 40 per cent decline in numbers over the last 30 years, driven by habitat loss, civil unrest and illegal hunting in their native Africa. Numbers in the wild have dropped from around 140,000 to 80,000 in 17 years alone.

Will you stick your neck out and help us save giraffes in Africa?