An Oldbury man is on a high after his girlfriend agreed to marry him during a romantic proposal in front of Dudley Zoo’s giraffes. 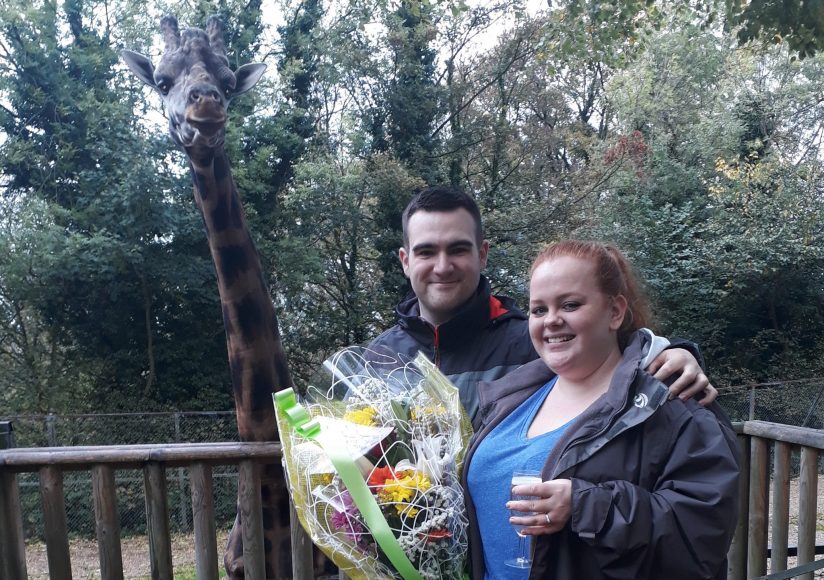 Our giraffes Kubwa and Josie witnessed the moment Ben Robson got down on one knee and popped the question to 20-year-old Tiff Cox, exactly a year to the day since they met.

Ben, aged 26, had arranged the unforgettable experience with DZG for Saturday October 13 and had a sparkling diamond engagement ring at the ready.

He had chosen the ring himself and got the size right too, as he had his Nan’s set of ring sizers at home and had remembered which one fitted Tiff’s finger perfectly.

The couple joined Head of Education and Presenting Phil Turner for the exclusive meet and greet feeding experience with the giraffes and Phil captured this gorgeous photo of the happy couple after Tiff, from Stourbridge, said ‘yes’.

Ben said: “Tiff loves animals, particularly giraffes, so I knew Dudley Zoo would be the perfect place for the proposal.

“Just as she was giving the giraffes the last bit of food from the bowl I went down on one knee and, as she turned around, I asked her to marry me.

“I was thrilled when she said yes. It all went absolutely perfectly and she was so surprised. It was a wonderful weekend for both of us.”

Ben also thanked Phil, who presented Tiff with a bouquet of flowers and handed over a bottle of bubbly for the happy couple, saying he helped make the occasion special.

Phil said: “It was a wonderful moment for Ben and Tiff and everyone at the zoo, including our giraffes, were delighted to play such a part in the happy occasion. We wish them every happiness for the future and hope to see them at the zoo again sometime.”

Many congratulations Tiff and Ben from us all at DZG!