DZG is sponsoring the dress rehearsal of Snow White and the Seven Dwarfs at The Grand Theatre in Wolverhampton  and we’ve given away more than a thousand tickets to local folk for the December 9 panto date! 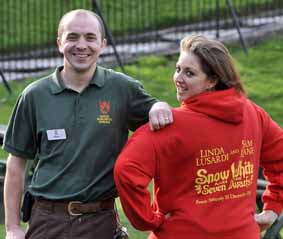 Youngsters  and the young at heart  from across the region will be joining us for the rehearsal of the family favourite starring Linda Lusardi and Sam Kane.

Groups who have been invited to the evening extravaganza include Penn Den Art Group, Chatback Productions, Kuumba Arts Movement, Stourbridge-based Side by Side Theatre Company and Star Youth Group, from Netherton.

DZG CEO Peter Suddock, said: “We are delighted to be teaming up with a premier theatre that’s on our doorstep and hope everyone will enjoy Snow White at The Grand and then book into Snow White’s Castle at DZG.”

DZG’s Winter Wonderland runs from December 5 to Christmas Eve and includes a magical train ride and show, plus a chance to see some of the rarest animals in the world.