Meet the new girl on the block, a Demoiselle crane who is settling into DZG’s triple aviaries. 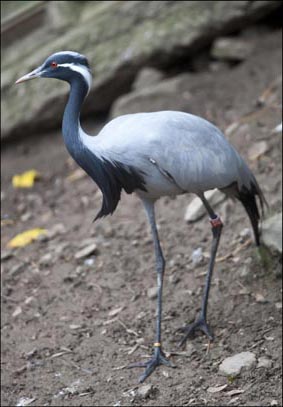 Keepers are planning to introduce the one-year-old bird who translocated from Sparsholt College, in Hampshire, to a male as part of a new DZG breeding programme.

Bird keeper Ben Vanes said: “She stayed off show for three days, which was mainly due to the weather, and has now been moved to the first of the triple aviaries, near the otters, with a range of other birds.

“She’s a little bit tentative at the moment as she gets used to the surroundings, but she’s settling in to her new home well.”

Demoiselles weigh between 2-3kg and are the world’s smallest species of crane.

They were named by Marie Antoinette, for their delicate maiden-like appearance when introduced to France from the Russian steppes.

Previous: Santa arrives in one week!
Next: The heat is on!