Primates and parrots are nuts about Gallic treats donated by Dudley couple, Anne and Arthur Weston. 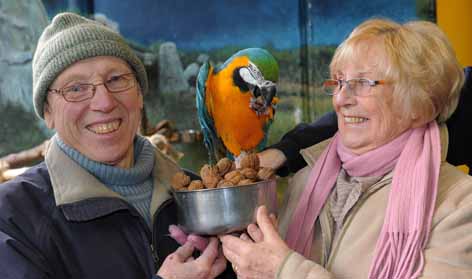 The Westons handed over bags of walnuts grown in the garden of their holiday home, in Bonneuil, South West France, following a bumper crop.

Retired engineering manager, Arthur, said:?”We’ve been picking two or three bucketfuls every day since autumn, and gave away as many as we could, but our French neighbours all seem to have their own walnut trees, so Anne came up with the idea of bringing them back to England to give to DZG.”

The nuts proved to be continental crackers when macaws, cockatoos and capuchins (small primates) couldn’t get enough of the tasty treats.

Curator Matt Lewis said  “Mr and Mrs Weston made a very thoughtful gesture and the parrots and capuchins have enjoyed their treats very much.”

CAPTION: Continental crackers:?Blue and gold macaw, Charlie, gets through the French walnuts donated by Arthur and Anne Weston from their holiday home in Bonneuil.

Previous: Year of the Dragon
Next: It’s a piece of cake for Nick