Some of the smallest mammals in the world have caused a stir at DZG.

Within a week of their arrival a six-strong group of British harvest mice, donated by Lakeland Wildlife Oasis in Cumbria, have increased their number to 10!   Presenter Caroline Howard, who is caring for the tiny native species in the Discovery Centre education block, said: “It was a bit of a surprise as just days after their arrival we discovered four babies, so we now have a grand total of 10 harvest mice, which is rather lovely.” 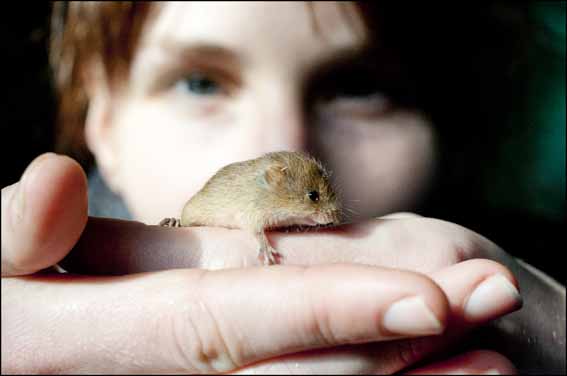 Weighing little more than a 20p coin, the harvest mouse is the only British animal with a prehensile tail that can be used as a fifth limb.

When wrapped around a stem it can act as an anchor, allowing nimble travelling and feeding in stems of cereals and grasses.

Harvest mice are categorised as Lower Risk by the IUCN Red List. Modern farming methods have caused a reduction in hedgerows, and combine harvesters leave harvest mice in grain fields with little chance of escape.

Previous: Big teeth for Ronnie
Next: Chick’s a headturner