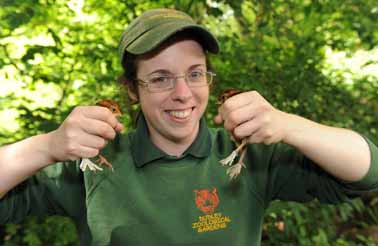 Staff noticed a couple of Satyr Tragopans had been born with deformed feet and feared the creatures would be unable to walk properly.   Quick-thinking keepers used medical tape to separate their toes and form a splint to keep the miniature limbs apart.   Joint head of birds Nicola Wright said: “The birds’ feet were quite badly mis-shapen and there was no way they could have survived like that so we decided to re-set the toes by splaying the feet using tape.   “It was a really fiddly exercise as the feet are so small, but we persevered and managed to get it done and, thankfully, it seems to have worked and the feet are now straight and as they should be.”   She added:?”Initially we weren’t sure how to save them, but Curator, Matt Lewis, remembered the tape technique he had used more than 20 years ago in a similar situation, so we decided to have a go, and happily it has rectified the problem and both birds are fine.”   The tape was applied when the birds, now six weeks old, were newly born.   Nicola added: “Unfortunately the tape dissolves when it gets wet and there may be a risk of infection so we have to replace it every day but it certainly seems to have done the job. 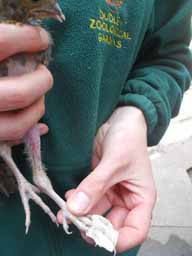 “The tape stays on for a few weeks until the feet are straight, but in the wild such birds would be the prey of small mammals, like rats, and not survive.”   The species, which is also known as Indian / Crimson Tragopan and Crimson-horned Pheasant, originates from central and eastern Himalayas.

CAPTIONS: These two tiny Satyr Tragopans can now walk properly thanks to the tape applied to their toes. 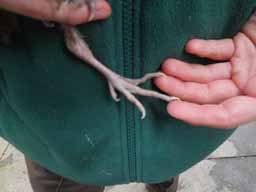