Newly-arrived llamas at DZG have been given L-plates. 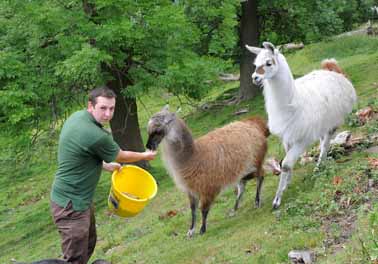 As a revival of an old tradition, the two newcomers have been named Lance and Luna.   DZG Curator Matt Lewis explained: “We have had not had llamas at the Zoo for about 14 years, but when they were here they were all given names beginning with the letter L and we thought it would be a good idea to do the same thing today.”   Female Luna transferred to Dudley from Wingham Wildlife Park in Kent and is seven months old. She has been joined by 18-month-old male, Lance, from a private collection in the Midlands.   Matt said: “The pair will live on the chairlift bank at the Zoo as it is cold and windy which is what they like.    “Llamas are very distinctive looking and this makes them very popular with visitors. When they are older we hope they will breed.”   CAPTION: Keeper Darren Sadler with newly-arrived llamas, Lance and Luna.