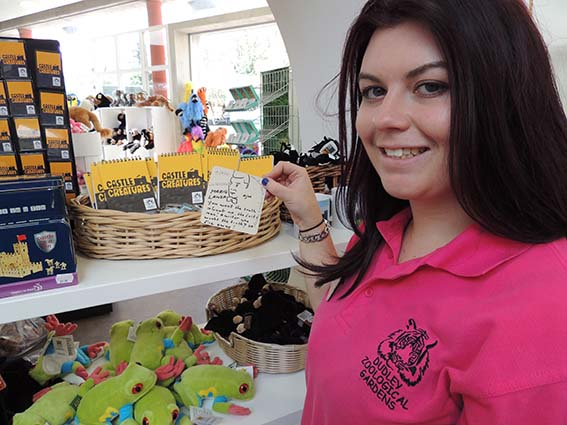 The mystery man, who has been baffling Black Country people for decades by leaving beer mats featuring sketches of the late opera singer Mario Lanza around the region, left a total of six cards on our site.

The discreet doodler deposited two in Castle Creatures  a new interactive medieval experience featuring live animals in the 11th century Castle – three in our Safari Gift Shop and one in the gent’s loo!

The artist  who has been compared to street artist Banksy because of his stealthy approach  left one card saying: “Lanza had the ability to expand his chest by 10 inches” and another read: “Murdered by the mob? 7.10.1959 Rome.” 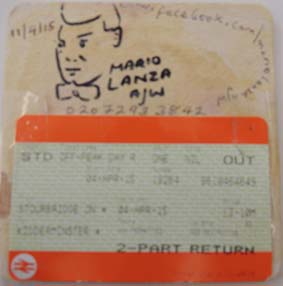 All the cards were signed AJW and included a phone number and a Facebook address. Another even had a train ticket taped to it, as shown left.

DZG Media and Communications Officer, Jane Thomas, said: “These beer mats have certainly caused a stir among our staff who were very excited about finding them.

“We hope this shadowy figure enjoyed our new exhibit and his visit to the zoo. Everyone is still having a good look around in case we’ve missed any mats so maybe our visitors can keep their eyes peeled too!”

Line drawings of Mario Lanza started turning up on the backs of beer mats shortly after the troubled opera star died in 1959, at the age of 38.

Since then, they have cropped up in pubs, shops and public places around the Black Country without the artist’s identity ever being revealed. A documentary has even been made about the unknown artist with a passion for opera.

It has been estimated that there have been 250,000 secret sketches scattered around the area since the 60s  with six of those now being cherished by DZG staff!