Squirrel monkey, Stumpy, is busy showing the ropes to a first time mum, after they both gave birth on the same day.

Nine year-old Stumpy, who has already raised a number of offspring of her own, has been on hand to help Dibley, aged five, with their newborn babes. 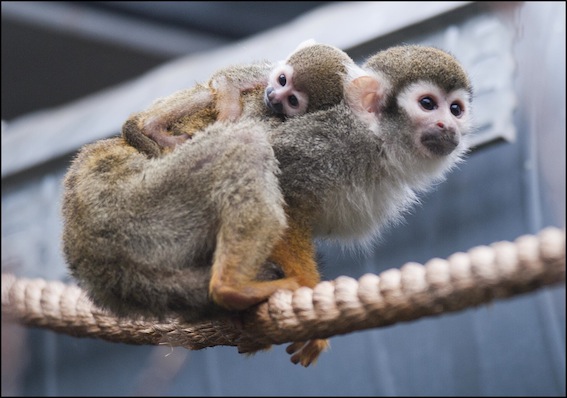 Lower Primates Keeper, Stacey Ball, said: “We knew the births would be imminent as they both became very large, but we never expected them to give birth during the same night, so we had a lovely surprise when we turned up for work in the morning and discovered Monkey Tails’ newest arrivals.

“It has really been amazing to watch them together as Stumpy has been helping Dibley with her baby.

“We noticed Dibley’s baby was slipping off her back and then saw Stumpy go over and show her how to move the baby onto her chest to suckle.

“You can also hear them communicating with each other all the time, so Stumpy is obviously giving plenty of advice to Dibley, who is coping extremely well with motherhood.” 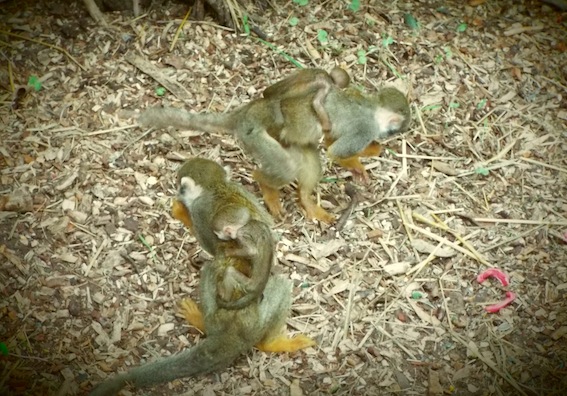 Both babies will be inseparable from their mums until three months of age, when they will begin to become more independent.

Stacey added: “We won’t know whether they are boys or girls until they start leaving their mums’ backs, when we’ll then be able to catch them and microchip them.”

Dad to both babies is dominant male, Oscar.

Previous: Hats off to you, deer!
Next: Fang-tastic half term fun!