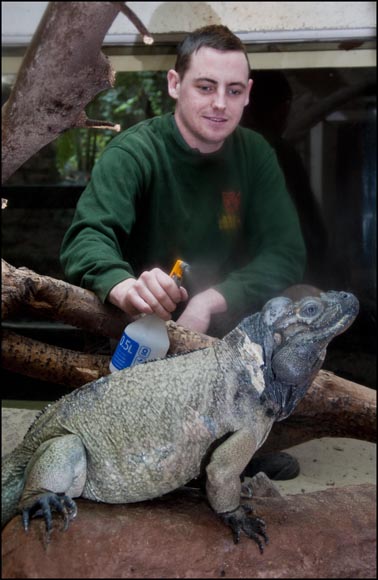 When keepers mist his Reptile House vivarium with water for humidity he makes sure he gets covered with the cool spray.

Section Leader, Pat Stevens, said: “Trigger loves the spray and rises up so he gets covered all over  he even tries to grab the water bottle from our hands.”

The species, which is native to Cuba and the Dominican Republic, is classed as vulnerable due to habitat destruction and invasive species.

Their name derives from the horn-like growth on their snout, which resembles a rhino horn.

Our Reptile House was officially re-opened on Easter Saturday following a £15,000 refurbishment which saw Members of DZG’s Development Team remodelling individual enclosures, installing timber flooring and cladding to walls around the public-viewing corridors and constructing a new glazed dual entrance.

The opening ceremony was performed by Mike Dilger of BBC1’s The One Show.

Previous: Rockin’ the Castle
Next: All change in Primate House