Keepers caught up with our fascinating naked mole rats to give them health checks and new names. 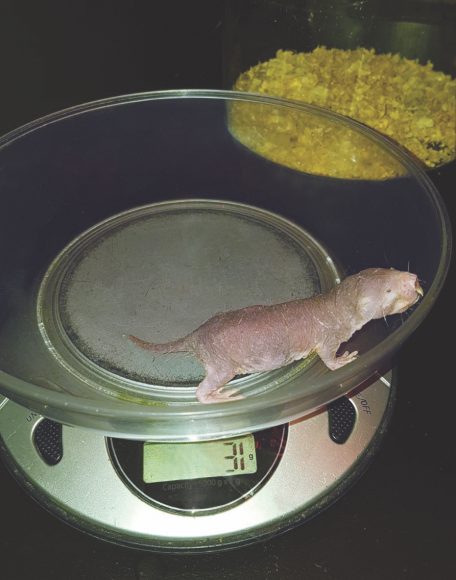 The five hairless mammals – a brand new species to our collection – have all tipped the scales at healthy weights and been given East African names.

Our queen naked mole rat – who weighed in at 54g – has been called Malkia, which means ‘queen’ in Swahili and the other female, 39g, has been named Nzuri, meaning ‘beautiful’.

The three males, who weighed 39g, 33g and 31g, have been named Uchi, meaning ‘naked’, Fupi, meaning ‘short’ and our lightest one (pictured) is called Kidogo, appropriately meaning ‘small’.

Senior Keeper Jodie Dryden said: “We waited a week or so to let them settle in before we caught them up to have their initial health checks, weigh them and clean out their exhibit.

“We also chose Kenyan names for the five, which all have suitable meanings in Swahili.

“They were all within the average weight range of 30-60g and are doing really well. Our visitors love watching these weird and wonderful cold-blooded creatures going about their daily business!”

The colony arrived from Chester Zoo on February 15 and are settling into their specially-built burrow in the indoor viewing area of the chimpanzee exhibit on the lower zoo site. They live in a social organisation like ants and wasps – there is a queen mole rat, soldiers and workers.

There are only five other zoos in the UK who hold naked mole rats, an East African species, which are neither moles or rats but rather more closely related to porcupines, chinchillas and guinea pigs.

We’ve started off with a breeding colony of five – two females and three males – so we’re hopeful the group will grow in number in the future!