Minister for Culture, Media and Sport, Ed Vaizey today discovered the magic of four Modernist structures at DZG that have been restored to their 1930’s glory. 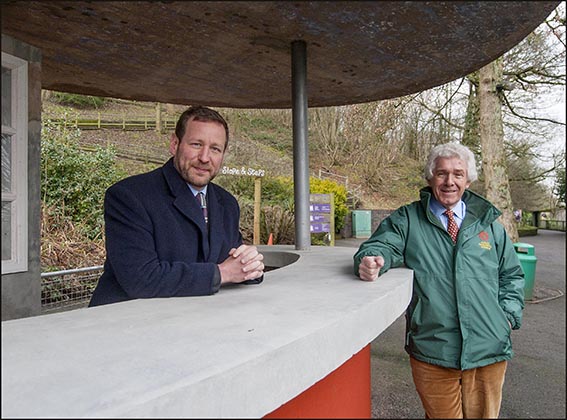 The minister was accompanied on the Tecton tour by DZG CEO Peter Suddock  pictured above  and Reyhan King, Head of Heritage Lottery Fund West Midlands who have supported the £1.15million project to restore the concrete buildings  the zoo’s iconic wave Entrance, Safari Shop, Bear Ravine and Kiosk One. 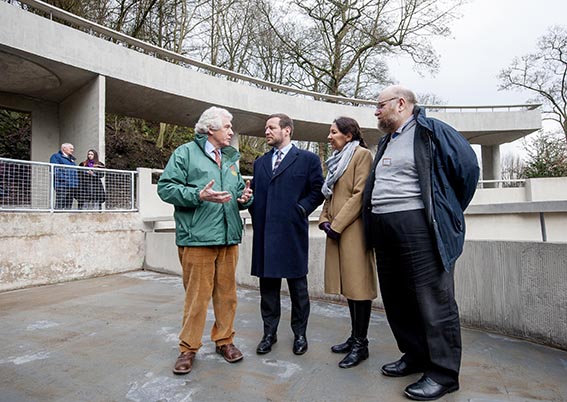 Mr Vaizey said: “They are simply wonderful structures, I love them.

“When you consider that DZG’s Tectons were constructed in the 1930s they are so imaginative, with their deep curves and sweeping shapes, they are beautiful, and what an incredible project to restore them to their original state.”

DZG has the world’s largest single collection of Tectons  a total of 12  designed by Russian-born Berthold Lubetkin, widely recognised as one of the most outstanding architects of the 1930s, and built between 1935 and May 1937 when the zoo opened to the public.    The collection was awarded World Monument status in 2009.

Peter Suddock said: “The tour was very successful, the minister showed much interest in the project and said it was the finest example of Modernist restoration that he had seen.

“The programme was made possible by HLF  we are immensely grateful that we have been given such an opportunity to work on this incredible collection that is recognised across the globe.   “They have been restored using original techniques and materials; this is the first time this has been done worldwide so it truly is a unique programme.”   The 36-month project also included the refurbishment of the site’s vintage chairlift and the launch of a pioneering apprenticeship scheme in concrete repair and conservation.   Mr Suddock added:? “It’s very much a bespoke scheme and we believe it will provide valuable skills within the building restoration industry, plus training apprentices on site will allow us to continue reparation of our other Tecton structures.   “The apprenticeship scheme has proved so successful that restoration of the Bear Ravine and Kiosk One has been completed ahead of schedule due to these homegrown skills.   “This knowledge has been shared with others as we progress; 20th Century society have been involved alongside international professional bodies, including architects and structural engineers.”

See more of Ed Vaizey’s Tecton Tour at DZG in the video below  . . .