Minister Baroness Hanham  Parliamentary Under Secretary of State at the Department for Communities and Local Government (DCLG)  today received an adoption package for a highly endangered Sumatran tiger when she visited DZG during a tour of Castle HiIl. 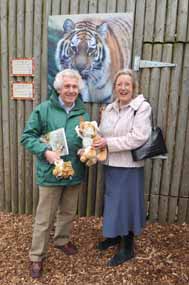 During a mid-morning reception in the zoo’s new £180,000 office complex, which has been funded entirely by DZG, the minister heard about plans for the site’s new entrance, refurbished roads and pathways, extensive signage and a proposedmedieval-themed experience in the 11th century Dudley Castle.

The £1million project will be funded by a European Regional Development Fund (ERDF) programme, which is managed by the DCLG.

Baroness Hanham CBE said it was fascinating to see what goes on at a busy modern zoo and to meet keepers who obviously enjoy their work with such a wide variety of rare animals.

CEO Peter Suddock said: “We are rather pleased Baroness Hanham has seen at first hand the work we do at DZG and also had a chance to meet several members of staff including our youngest apprentice keeper who is just 16-years of age.

“She was impressed with our inspirational programmes and very interested in our worldwide conservation projects with some of the rarest animals in the world. 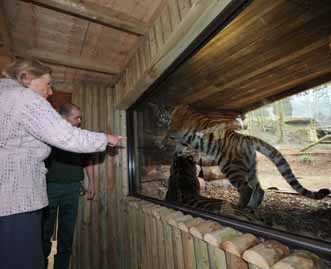 “The ERDF scheme will support the long-standing and on-going capital investment made by DZG which amounts to £1.8million pounds in the past five years, all found from our own funding.

“That’s no mean feat in these times and it is something of which we are immensely proud.”

Baroness Hanham rounded off her DZG visit with a birds of prey experience in the castle courtyard, and learnt about a native species conservation programme before meeting newly-arrived Sumatran and Amur tigers and feeding a rare Rothschild giraffe. 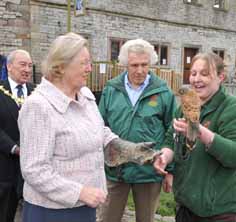 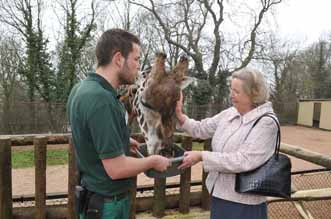 Keeper Jay Haywood talks about our rare Rothschilds giraffes with the Baroness. &nbsp