Keepers discovered 11-month-old Harley’s soccer skills after a tip off from his former owners. 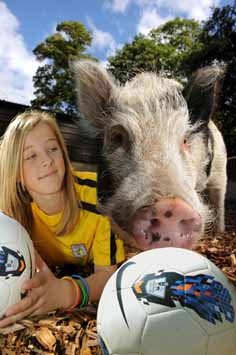 Now he has been given a special enrichment ball to play with, which rewards him with tasty treats.

Curator, Matt Lewis, said: “Harley’s owners were out at work and he was lonely so they donated him to us. When he arrived he had a leather football which wasn’t ideal as such balls are treated with chemicals.

“However, we  have now given him an enrichment ball which is a safe way to keep him occupied and rewards him with treats and interesting smells.

“He really enjoys playing with the ball, and heads it with his nose and sometimes tries to kick it, too.”

Previous: Our visitor numbers are up!
Next: Elliot’s in the frame