Keepers have installed new wooden doors in the giraffe house, but rare Rothschild Mia wasn’t too keen on the work. 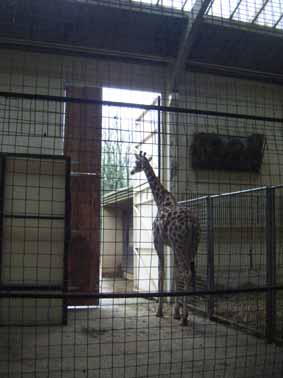 Assistant Curator Richard Brown and Section Leades Jay Haywood worked alongside the site’s maintenance men to build the doors, which are designed to help keep the warmth inside the house and save energy.

The team put up scaffolding indoors to fit the huge doors while Kubwa, Mia and Josie were enjoying the fresh air outside.

But when it was time for the trio to return inside and pass by the new doors, Mia had other ideas.

Richard said: “Giraffes don’t like the slightest change and Mia was particularly wary of the new doors, even though sh had been able to see exactly what we were doing while we fitted them.

“Kubwa and Josie came in with no problem, but it took Jay and myself two hours to get Mia inside on the first night using a lot of soft speaking, persuasion and the promise of her favourite treats.

“It took about four days until she was happy enough to come in of her own accord.”

Previous: Baby, it’s cold outside
Next: Fangs for the treatment