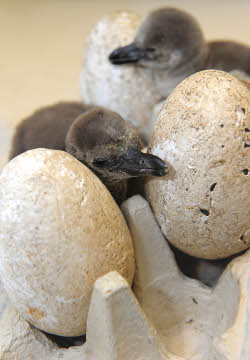 DZG Chief Executive, Peter Suuddock, said: “We were thinking of names for the youngsters when the royal announcement was made so we called them William and Kate to mark the occasion.

“Dudley Zoo incorporates the 11th century Dudley Castle which has strong royal connections; Queen Elizabeths I and II have both visited and several dukes and earls have strong ties with the site, so we felt it fitting to send William and Kate an adoption pack for their namesakes and wish them well for a long and very happy future.”

DZG’s colony of 60-plus parent-reared Humboldts is one of the largest in the UK.

CAPTION: Will and Kate settle into their new home.