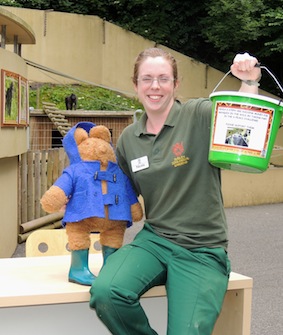 Ahead of her mountainous Three Peaks Challenge, alongside Upper Primates Keeper, Stephanie Sawyer, next weekend, Nicola will be on hand to answer any questions about the primate species.

And she won’t be alone, as she’ll be joined by her much-loved teddy bear, Paddington, as it’s also Bring Your Bear to the Zoo day!

Nicola, said: “Steph and I are in the final few days of training before we set off on July 5 to climb the three highest mountains in the UK – Scotland’s Ben Nevis, Snowdonia in Wales and Scafell Pike in Cumbria in just 24 hours.

“But I’ll be raising awareness and answering questions about the Sulawesi crested black macaque species and specifically our eight macaques here at DZG, throughout the day on Saturday by their Tecton enclosure and explaining how they are targeted for meat and due to the clearing of their rainforest habitat.

“I would also be interested to hear from any visitors who have done the three Peaks Challenge themselves, so come and say hello if you’ve done it!”

The girls will be joining ten other keepers from five zoo collections around the UK for the climb in aid of Selamatkan Yaki  a conservation, research and education programme in Indonesia which is working to save the species

Nicola will be raising funds for the appeal on Saturday or the girls can be sponsored online by CLICKING HERE.

Previous: Bring those bears!
Next: Ely joins the gang!