Chris Leeson is following his dream after being named as DZ’s new Conservation Officer. 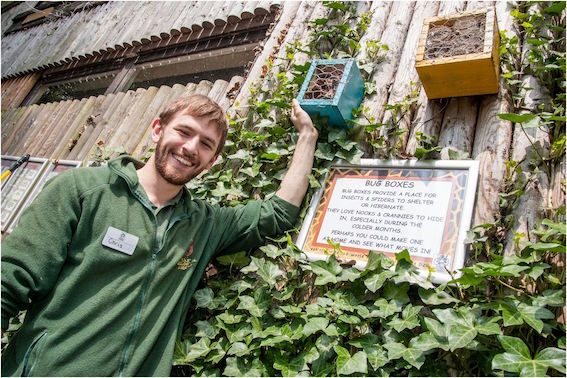 And the former zookeeper, who’s been a familiar face on site for the last few years, working on the zoo’s farm and primate section, has already thrown himself into the role to raise awareness of conservation for our visitors.

Chris, a wildlife conservation graduate from the University of Kent, said: “This is what I’ve always aimed to do, so I’m very excited to get the role.

“My job is to raise awareness for of all kinds of conservation issues, especially native species, such as badgers, bats, foxes, birds and insects.

“It’s just as important to promote these kinds of animals and provide visitors with information about them as it is the exotic species we have on site, as these are the animals that people can readily find in their back gardens.

Chris has already set up night cameras on site and captured a family of foxes, complete with cubs on film and is busy forging connections with local nature and conservation groups. 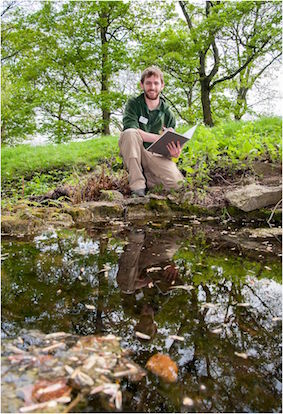 He’s also applying for a licence to enable him to work in DZ’s pools and survey the site’s Great Crested Newts population, which are a European Protected Species, as well as making the ponds more of a feature for visitors.

The 24 year-old added: “I want to see what native species we have across the site. We’re incredibly lucky to be working in such a unique wooded site, which is home to hundreds of species, so there’s plenty to discover.”

As well as running a number of forthcoming BIAZA conservation campaigns including Grab the Gap and Bioblitz, Chris is also set to begin work with Britain’s most threatened moth species –  the Barberry carpet moth, an insect DZ has been associated with for 23 years.

Chris said: “I’d love DZ to get back into being actively involved in this project, which includes maintaining a Barberry Highway along the Shropshire Union canal towpath, so I’m hoping to start propagating the barberry plant, the moth’s primary food source on site, and hopefully getting them growing out on local nature reserves.”

And if that’s not enough, he’s also busy organising a summer school and a Zoolympic event for the school holidays, when keepers and young visitors will be invited to complete a number of Olympic style animal-themed events, to raise money for the World Land Trust’s Atlantic Forest appeal.

Chris added: “It’s a really varied role, which I’m really enjoying and I can’t wait to get stuck in!”

Zoo Manager, Matt Lewis, said: “DZ has always been at the forefront of native species conservation projects, but it’s great that we now have a somone who can co-ordinate everything from on site.

“Chris has already come up with some great ideas and is busy forming links with conservation groups so DZ can become actively involved in projects both locally and nationally.”

Previous: Makalu leaves DZ
Next: A trio of birthdays!