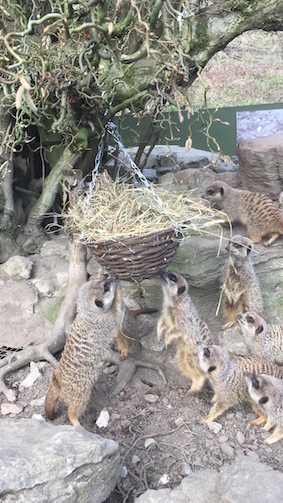 There was no hanging around for DZG’s meerkat mob when they discovered some enrichment in their enclosure.

They were straight on the hunt for the tasty treats when keepers hid some of their favourite mealworms in hanging baskets, topped with hay, which they then hung from the Reptillary’s tree branches.

Section Leader, Jay Haywood, said: “The meerkats had great fun. Because the basket was hanging from the branch, the more they tapped it from the ground, the more it began to swing from side to side, which meant they had to work even harder to work out how to get the food. 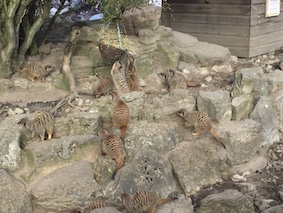 “One meerkat was that persistent that he ended up clinging to the basket upside down and also began swinging from side to side as he attempted to empty the basket.”

Previous: Presents galore for Daseep
Next: A pound for pandas!