Nine year-old brothers Lucky and Marvin have joined a collection of exotic and farm critters at Wolverley Secondary School’s Animal Centre, which delivers BTEC Animal Care to the school’s students and hosts workshops for the local community. 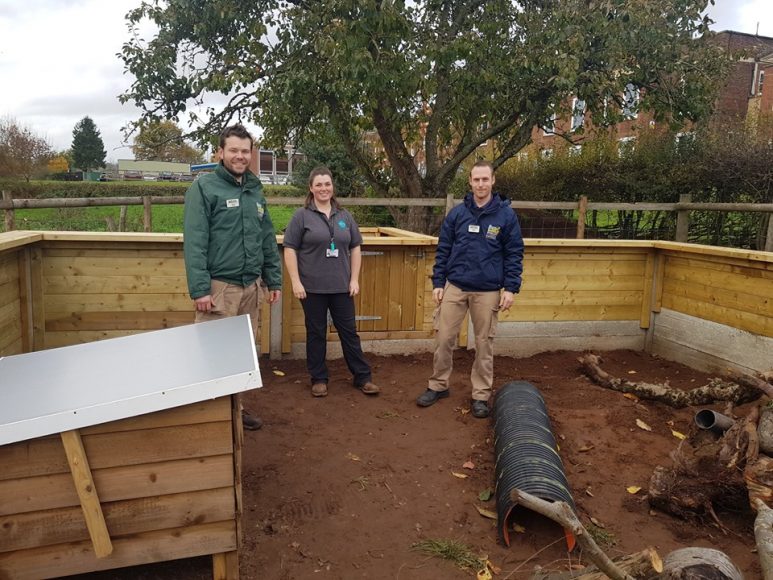 DZG keepers have been working alongside centre staff for the past few months, advising and designing the meerkats’ specially constructed home and completed a number of visits before the pair moved in on loan.

DZG Curator Richard Brown said: “We’ve had links to the Centre for many years and were pleased to work alongside them and we’re sure Lucky and Marvin will enjoy their new home.”

The meerkat brothers made headlines back in 2010 shortly after they were born here at DZG after Lucky was picked up from his enclosure and carried off by a crow.

Luckily visitors witnessed the incident and after frightening the bird, saw it drop into a nearby enclosure where keepers were able to rescue him. To avoid a repeat ordeal, the tiny brothers were hand reared by Richard at his home and he was also on hand to safely deliver the pair to the Centre.

Wolverley Animal Centre Manager, Rebecca Martin, said: “Lucky and Marvin have settled really well and taking full advantage of the sunshine. They have established a routine quickly and making great use of their new environment. They have been very popular with the school children, who have been visiting them in small groups. We are delighted to have them join our Centre!”