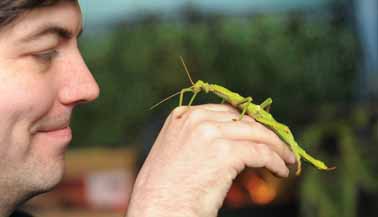 Tricksters reveals how different species use camouflage, mimicry and bluff to protect themselves from their enemies in the wild.     Presenter Langan Turner said: “In the natural world, hide and seek is literally a matter of life or death, and the new presentation features animals that have to be masters of disguise in order to survive.”   Two non-venomous milk snakes pretend to be dangerous by copying the colour of lethal coral snakes, while a pair of Grenada stick insects show how they have become well-practised mimics. At six inches long they are  among the largest insects on earth.   Langan said:?”Camouflage allows an animal to blend in with its surroundings, while mimics are shaped like another object, as in the aptly-named stick insects.” 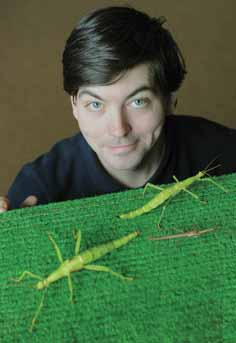 CAPTIONS: Presenter Langan Turner with the pair of Grenada stick insects that are part of  the new Tricksters display.