There’s certainly nothing the marrow with these huge veggies, which have been donated to DZG’s animals, by Dudley gardener, Diane Shakespeare. 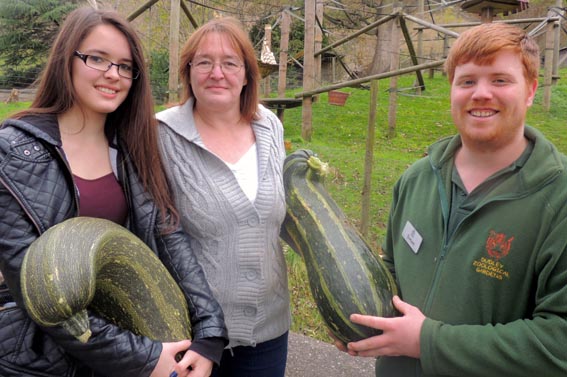 The six giant marrows will be used as a teatime treat for several species, including Bornean orang utans, lemurs and yellow-breasted capuchin monkeys.

Diane  pictured handing over the marrows with daughter, Olivia, to Senior Keeper Simon Moore  said: “I had a glut of marrows this year on my allotment and didn’t really know what to do with them

“I had the idea of donating them because my daughter has a bearded dragon and was feeding it some marrow so I thought there must be some animals at DZG that would enjoy them!”

DZG Senior Keeper, Simon Moore said: “It’s great to receive donations such as these marrows, which will be enjoyed by many of our animals.

“It is lovely that people think of DZG and our animals rather than letting vegetables go to waste.”