A group of rare Sulawesi crested macaques has moved into a new enclosure designed in-house to meet the needs of the critically endangered primates. 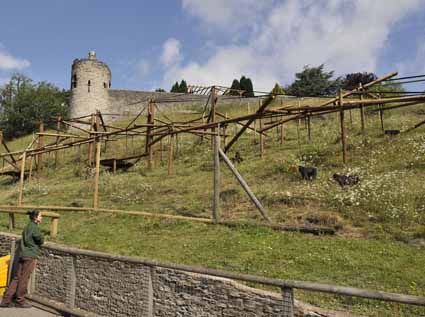 Two males and two females of the five-strong group were recently transferred from Ramat Gan Zoo in Tel Aviv, Israel, and were quarantined for six months.

The transfer was part of an international breeding programme run by the European Association of Zoos and Aquaria (EAZA) to strengthen the bloodline.

Keepers kept a watchful eye on the macaques as they settled into their new home, in case any of them decided to test the boundaries.

Senior Curator Derek Grove said: “The enclosure was designed and constructed in-house and is a large space complete with climbing frames and ropewalk.

“It’s good to bring unrelated animals into the country to help the breeding programmes, and in due course this input will benefit other UK groups.”

CAPTION: Keeper Stacey Ball looks out for monkey tricks as the group settles into the new enclosure.