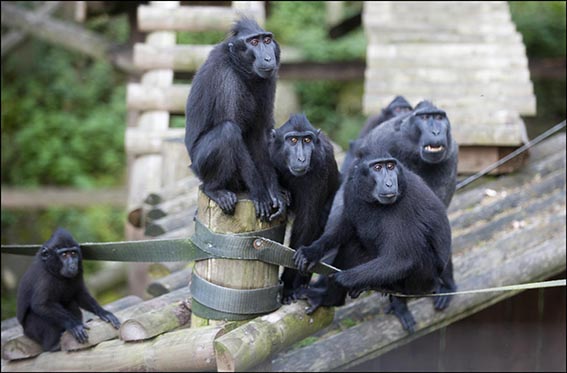 Females Sylvie and Sophie, alongside their 20-month-old sons, Steve and Stan, have moved back to the triple Tecton enclosure to join Simon, new male, Rowan and females Poppy and Jasmine.

Sylvie, Sophie, Steve and Stan were briefly moved to the bank enclosure while the new arrivals settled into their new home after recently relocating from Paignton Zoo.

Head of Upper Primates, Pat Stevens, said: “The introduction process went really smoothly and despite the four girls never having met before they all went and sat huddled together with Steve and Stan in the middle and started to groom each other, which is a really positive sign of acceptance and bonding.

“We couldn’t have asked for anything more.”

Macaques are critically endangered primates, originating from the north east of the Indonesian island of Sulawesi.

DZG first entered into an EAZA run international breeding programme for Sulawesi crested macaques in 2011 after a group transferred from Israel.