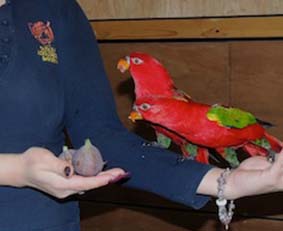 Lories are nectarivores and have a low-protein, low-iron diet, feeding on nectar, pollen, flowers, insects and soft fruit, so DZG’s 14-year-old brothers, Red and Yellow, particularly enjoy a fresh fig at this time of year.

“They enjoy it chopped up into little pieces, which they take out of the Presenters hands, or tied up with string in their aviary; although they’re not keen on the skin which they drop on the floor.”

Other fruit enjoyed by the lories include pieces of apple, melon, pear, grape, lime and orange as well as liquid nectar which all has to be meticulously weighed out by presenters each day according to the birds’ daily weight.

Rachel added: “The birds have to be at an optimum flying weight every day, so each morning they are weighed their food adjusted according to the results. 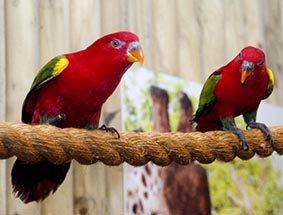 Lories also have long, sponge-like tongues, which allows them to collect the nectar from their favourite fruit and flowers quickly and easily.

And presenters get the pair to hang upside down from the Go Wild! Theatre’s ropes during the show and take food out of their hands to show the audience their specialised feature!

Native to the tropical forests on the Moluccan Islands of Indonesia, the yellow-backed chattering lory is classed as vulnerable on the IUCN Red Data List due to habitat destruction and collection for the pet trade.

As their name suggests, the chattering lory can be extremely vocal, producing a loud, shrill, whistle-like call.