A very special Olympic torch will be putting in an appearance at DZG this weekend as it continues to raise thousands of pounds for charity in a virtual relay.

Logan’s Torch, along with current ‘owner’ Lorraine Cowan, of Dudley, will be taking in a tour of the site on Saturday morning. 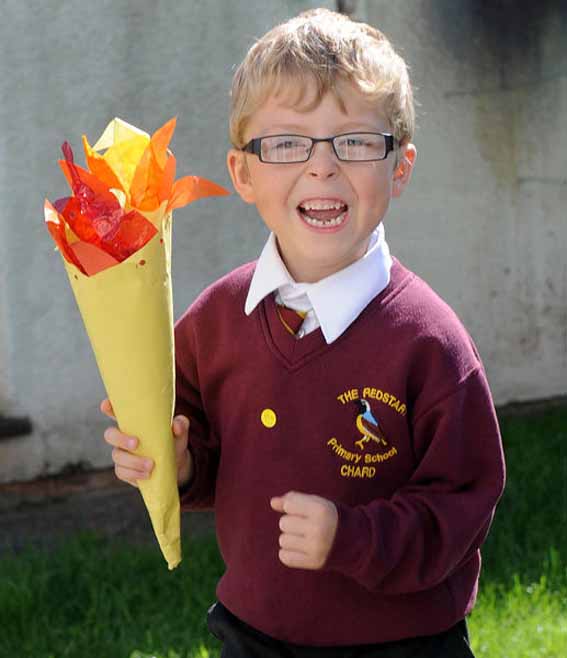 The paper torch is making a round-the-country relay, after being sold on ebay by its creator five-year-old schoolboy Logan McKerrow, of Somerset  pictured above  who hit on the idea after seeing authentic Olympic torches for sale on the internet for thousands of pounds.

His torch has been bought and re-sold by dozens of people helping him raise money for Hearing Dogs for Deaf People charity.    Lorraine and her partner, James Gould, both aged 31, will be taking their torch photocall among a bunch of cheeky monkeys in DZG’s Lemur Wood.   She said: “James and I just wanted to be part of it and help Logan raise more funds. It’s an amazing thing to do so we decided to bid on ebay and won it for £33.46 which was made up to £42 via Gift Aid.   “We also wanted Logan to see where Dudley was on the map and thought what better place to show him than Dudley Zoological Gardens, so we approached staff to see if it was possible and they arranged for a photoshoot with some of the lemurs, so we should get a funny photograph for Logan’s facebook page.”   DZG Head of Media and Communications, Jill Hitchman, said: “We were delighted when Lorraine contacted us  what a brilliant idea to send the torch on its way for such a fantastic cause.   “We’ve also had a whip round in the Press Office and now have a £20 donation to further boost Logan’s funds.”   In just a few weeks more than £20,500 has been raised via 400 plus donations  achieving 41% of Logan’s £50,000 target.   A Just Giving donation page to accompany the relay was launched after Logan’s story appeared on BBC Breakfast and in national newspapers.   www.justgiving.com/lets-hear-it-for-deaf-children